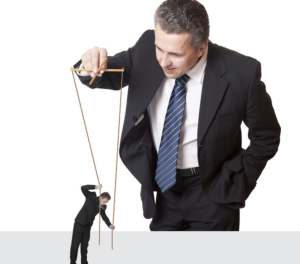 The workplace is where humanity’s primal drive for sustenance and survival is most prominently played out.  As such, it is a hot bed for control driven behavior and practices.  Some graciously refer to this compulsion to control at work as just “trying to get ahead” or “make ends meet,” but in truth it can be argued that workplace behavior is nothing less than the survival of the fittest.

For sure, there is a need for control at work.   It is necessary for establishing and maintaining efficient work practices and policies, technical procedures, quality control, and proper supervision of workers and projects, and in keeping on top of things in general.

It is important, however, to be able to distinguish between necessary forms of control and what I call excessive or domineering forms of work control.    The latter are primarily triggered by our fears, anxieties, insecurities—and greed—and easily create conflict and dissension within the work place.

A recent case in point concerns a serious dispute between American Airlines and online ticket agencies over air fares, as reported in the January 16, 2011 Travel Section of the Los Angeles Times under the following headline:

“A Fight Over Flight Prices—Maneuvering for Control”

The dispute centers around how American flights and services are displayed on Expedia and Orbitz (and other online agencies), as well as the booking fees paid by American to those agencies.  American Airlines, upset by the way its fares were being displayed by online agencies, decided to sell tickets through its own on-line service, and pulled its fares from Orbitz.  The other agencies retaliated by delisting the airlines from their services.

The article calls American’s bold move as “the first shot in a war
that could change how travelers buy air tickets….”  War, of course, is all about control, which was made eminently clear by a statement issued by American’s spokesman:

The High Cost of Control

The airline-agency dispute will likely be resolved at some point.    But at what cost and benefit?   Certainly the attorneys will have a heyday with it all, costing both American and Orbitz a great deal of money.   Consumers, too, will lose, since they will have fewer travel choices and not be able to effectively compare prices.

Excessive work control can burn up resources and reduce options. It also results in greater mistakes, inefficiencies, and lost opportunities, which I will examine in future posts.

In many instances, potential work and business control conflicts and disputes can be avoided by these four effective “decontrol” techniques:

1.   Address the Facts, not the Emotions: Many, if not most, work and business disputes are caused and propelled by strong emotions, particularly fear and anger. We are prone to act aggressively (and contrary to our best interests) before we have the opportunity to objectively examine the underlying facts and issues.

Make sure you know the real facts.  Don’t make assumptions.   If you are not sure about something, seek clarification.  Often times we act impulsively on misconceptions, only to regret it later.

2.   Be Clear What’s at Stake. It is important to evaluate what really is at stake in the dispute.  It simply may not be that important in the scheme of things.  To do this properly, you need to take your ego and hurt feelings out of the equation by processing them in a healthy manner (I refer to this as embracing and processing your Personal Truths in my book, Losing Control, Finding Serenity.)

As you work through this process, you will often find that the wisest choice is simply not to engage.

3.    Address Your Fears. Most controlling or aggressive actions are fear based, but many times we either are not aware that we are acting out of fear, or we exaggerate the extent and degree of our fears.   To gain proper perspective, ask yourself, “Am I acting out of my fears?” and “Are my fears more imagined than real?”

In my book,  I also write at length about conducting a “fear inquiry” as a means of getting to the heart of our fears.  In most instances, these inquiries lead to the conclusion that our fears are more “fictional” than real.

4. Evaluate the Real Costs.  The costs of business disputes and conflicts most always include more than money.  What is frequently overlooked (or under-evaluated) is the considerable time and energy it takes to do battle, which otherwise could be applied to much more productive and profitable matters. This sheer diversion of valuable resources can far exceed the monetary costs.

Try using these useful tools the next time you face a potential work or business dispute or conflict.  I am confident you will save yourself unwanted financial losses, diversions—and headaches!

In the meantime, remember to,

For more on this important subject, read my post “Work Control: Five Ways It Harms You and How to Avoid It.“